This afternoon I had Radio Five Live burbling in the background, while I toiled away in the basement of the ivory tower.

Richard Bacon was in the chair, and Cardinal Keith O'Brien's resignation was a hot topic as you'd expect. One of Richard Bacon's guests was William Nicholson, the screen writer. I was enjoying the interview with William Nicholson until I was brought up short, then horrified.

William Nicholson stated that abuse in the Roman Catholic church was as a direct result of clerical celibacy. It's a common opinion, and one that Nicholson is perfectly entitled to voice. However, it's an opinion, and I was horrified that a responsible journalist such as Richard Bacon, just let it pass without contesting it, or asking for evidence.

The interview was paused, in order to ask for comment from two Roman Catholic Sisters from Scotland. Their interchange with Richard Bacon was robust, but nothing out of the ordinary. I was scandalised to hear Richard Bacon refer to the exchange as 'hysterical'. I'm sure he didn't mean himself. Why is it that women who aren't afraid to express their opinions are called hysterical?

One of the Sisters said in passing that she was celibate, and was William Nicholson saying that as a consequence she was a sexual predator? When the conversation returned to Nicholson he was at pains to make clear that he wasn't implying anything about the Sisters themselves. He felt that the male sexual urge was stronger than the female, that the latter was easier to sublimate (I paraphrase). WHAAAAAAAAAAAAAT!!!! Again Richard Bacon didn't even blink at this extremely contentious statement (he was rather excited about his next interview, with Johnny Marr).

Among the many reasons I listen to Radio Five Live is the high standard of reporting and debate, and the large number of female presenters (who are feisty - another word that only seems to be used about women).

Shame on your Richard Bacon!

You let Radio Five Live down.

You let journalism down.

You let women down.

You let yourself down.

This year I have been mostly... 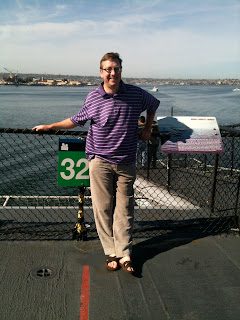 Adam and I sponsor a child in Sri Lanka via the charity Plan UK. You are in encourage to write to the child, and they, or in our case, his Mother, writes back.  However, given the expense of translating your letter and transporting to 'your' child, it's best to send a letter every six months or so.

Last week I realised that I had written for over a year. The Plan website allows you to send a letter online, so I logged on and set to. I then went blank. How to sum up the last year. It would be hard enough when writing to a friend. I wrote about our kitchen extension; our holiday in SanDiego; and uploaded a photograph of Adam (above).

In the end, it's the contact that's important, but I feel a bit dissatisfied.
Posted by MissT at 3:56 PM No comments:

I've been suffering from a cold. Colds always hit me hard, so I was snuffly and snotty for a few days, then exhausted for a few days. The boy Lawrence has it now, and is out for the count upstairs.

I often declare (with pride?), that I'm the world's worst nurse. Or is it that I want to be the person who's looked after? Do I see myself as a rabbit in the headlights? Is it that I don't want to make effort?

I have resolved to be a great nurse.
Posted by MissT at 6:26 PM 1 comment: