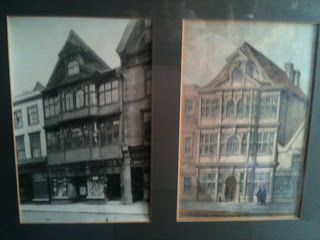 Behind the 18th C facade of 3 Cornmarket St, is the remains of a 16th C house, with a preserved Elizabethan painted room. Thanks to the Oxford Preservation Trust, I had a guided tour today. 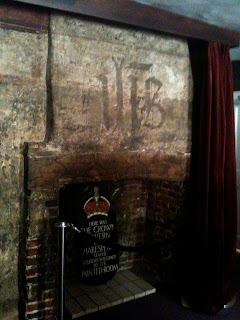 It's thought that the paintings date from between 1564 and 1581, when it was a private house occupied by John Tattleton, a tailor and local dignitary. The 'painted room' would have been the principal bed chamber. A painted room like this, was the cheaper alternative to wall hangings. 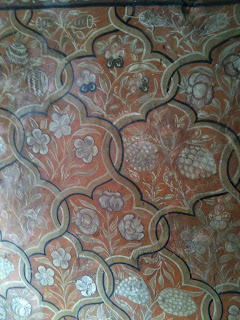 Later, the house was the 'Crown Inn', run by John Davenant, a friend of one William Shakespeare. It's thought that Shakespeare would have stayed in the room when travelling between London and Stratford-upon-Avon.

The tour guide repeated some Elizabethan scuttlebutt, viz. Davenant's son William, was in fact Shakespeare's, the evidence: he was called William; Shakespeare was his godfather; John Davenant was a grumpy old cove (unlike his wife); and William Davenant became a famous poet. Now if said son has been called Horace, and after his birth Davenant and Shakespeare had never spoken to each other again...then I might have thought there was something in it. It makes me MAD that poor Jane Davenant's reupation is still being traduced. 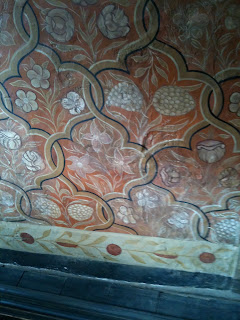 The room has been clearly restored in places... 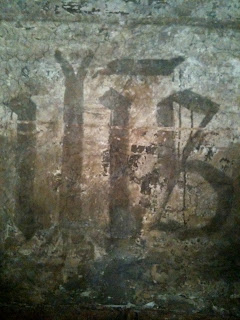 ...but there was still a wonderful feeling of touching the past...and that's even with electric sockets and cat5 cabling!

Let's hope that now the OPT has taken over the room will be open to visitors more often.
Posted by MissT at 8:24 PM No comments:

That's the usual reaction I receive when I explain that I work at Blackfriars in Oxford. It can take a while to explain. Thought I'd prepare an FAQ.

Who do you work for?
I work at Blackfriars, Oxford, part of The English Province of the Order of Preachers (which also covers Scotland, Grenada and Barbados).

Who?
Dominican friars (the word friar is derived from the Latin word frater, which simply means brother), a religious order in the Roman Catholic church. In the UK they're also known as Blackfriars, as they wear a black cloak over their white habit.

Monks then...
No, monks are tied to a particular monastery, and although Dominicans live in communities, they can be called to serve anywhere they're needed. That's why I've had three managers in three years, not because I'm difficult to work with (honest).

What do you do?

I'm the Assistant Bursar, and Academic Administrator, so I have a wide brief which covers finance, student housing, admissions, visas, and a variety of other things.

Isn't it a bit weird working there? They can't like women or they wouldn't have chosen to be monks?
Any more for any more?